When I was preparing to go to San Diego, I commissioned an art piece for Prince of Air and Darkness from a graphic designer I found through DeviantArt. After giving her a brief description of Finny and Roark, this is what she produced: 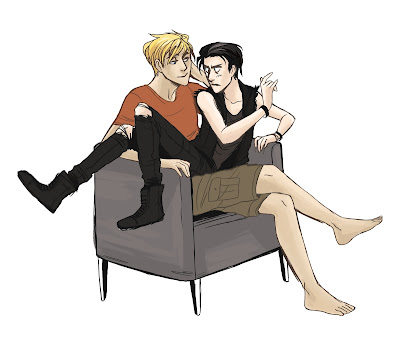 Cut to this month. The fangirl-worthy Kelsey (a.k.a. Hootsweets) has done it again! This time around, I gave her the snippet of Prince of Air and Darkness I've included below and she gave me another lovely commission in exchange.

* * * * *
I glance behind me, adjusting my speed so the ball will land just over my shoulder. It hits my hands and I clutch it to my side, spinning around another guy and heading at a diagonal toward the end zone. Gumba thunders toward me, but I may be just able to beat him there—

A familiar form, partially obscured by the sun’s beams, walks by the sideline. I stumble a bit when I recognize the laconic gait.

That was a bad idea.

Gumba takes me down on the sideline. Even he’s surprised by how hard the hit was. He pokes my ribs and I make a noise to let him know I’m alive. It’s easiest to hand over the ball so the next play can start. I groan a little when I shift my head, spitting out grass and dirt. Right onto a shining pair of Oxfords mere inches from my face.

My eyes travel up from the shoes to the straight, pressed lines of the wool slacks. The thin leather belt I could never afford. The buttons of the dress shirt. And there, like a freaking cherry on an evil sundae, the sharp twist of the lips that’s the closest he ever gets to smiling. Apparently, super-powered magickal villains don’t need to smile.

“Wool in this weather, Roark? Isn’t that a bit douchey, even for you?” I snark.

He looks like crap. His cheeks are hollowed, the hint of dark circles under his eyes. He’s always been pale, but this time there’s an edge of sickness to it, like he hasn’t seen the sun all summer. Although … Unseelie court. Not sure if they’re allowed aboveground.

The toe of his Oxford stretches out and presses against the underside of my jaw, tilting my face up just enough for my eyes to meet his.

Roark’s eyes are the freakiest thing I’ve ever seen. Ice blue, pale as fuck. Thanks to his dark, nearly black hair, they appear even lighter. Worse, he never glamours them. Which pisses me off to no end, since my own eyes are some muddy, unremarkable blue.

Right now, that glacial gaze skims over me, dissecting me with the brisk efficiency wealthy aristocrats seem born to use against their underlings.

“Farmer’s tan and athletic shorts.” The edges of his mouth tighten. “Some things never change.”
* * * * *
As you can see, she outdid herself again. 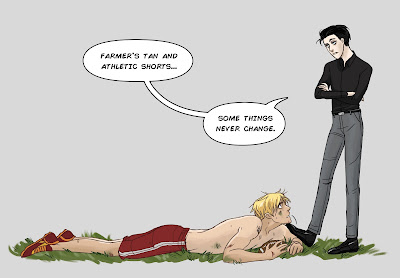 Next month I'll post whatever my next commission from her is. In the meantime though, if you're interested in seeing more of Kelsey's work, you can find her through these sites:
http://hexcomic.com/ - Her original webcomic
http://www.patreon.com/hootsweets - Pledge page for updates on in-progress work and commissions
http://hootsweets.deviantart.com/ - DeviantArt collection
http://hootsweets.tumblr.com/ - Tumblr collection
Posted by M.A. Grant at 12:07 PM 6 comments: