One of my favorite jobs as an author is to tease out who my characters are. I mean, they're so busy yammering at me that it makes sense that I should get to know them. Sometimes this process is easy, other times it's like pulling teeth. And sometimes I want to get a different view of the character because I know the truth may not be fully there.

Sebastian and Sláine from Prince of Earth and Ice, the sequel of Prince of Air and Darkness, are two such characters. Sebastian is a prodigal Seelie prince and Sláine is the Unseelie high prince who defected and became a traitor to his people. Neither of them is good at letting down their guards; if they did, survival would be impossible. Writing their love story is a true challenge and I'm enjoying myself immensely.

One of my favorite ways to tease out more meaning behind characters is to draw them a quick tarot spread. It's only three cards -- past, present, and future -- and recognizing threads throughout the cards often gives me great ideas of what to enfold later in the manuscript.

The deck I used for these spreads (and my favorite deck in general) is the Llewellyn deck. The focus on Welsh mythology and the soft and detailed watercolor designs are perfect for a story of warring faerie courts and the political intrigue and romance that come with them. 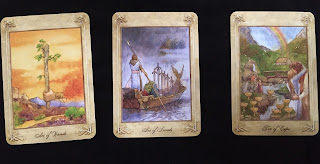 While the process of drawing a simple spread is fun for me, it also helps me better understand my characters. Bits and pieces of this spread will probably show up in PEI, so now you know what to watch for when it comes out!